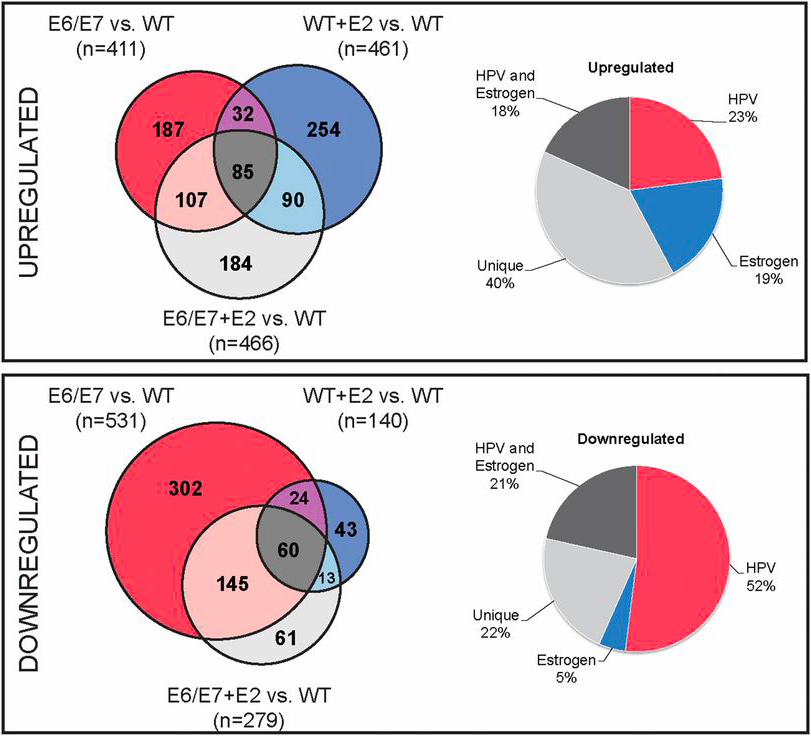 Human papillomavirus (HPV) and the hormone estrogen are both linked to the development of cervical cancers, but how they work together has remained unclear. A new study by University of Wisconsin-Madison researchers shows how the combination of two factors influences the local cervical environment and drives the progression of cancer development.

HPV is a virus that infects epithelial cells of mucous membranes such as the vagina, anus or back of the throat. Over 150 strains of HPV are known, ranging from those that cause benign warts to the high-risk strains that cause the majority of all HPV-associated cancers. However, only some high-risk infections progress to cancers, and a better understanding of what factors drive cancer formation should lead to improved therapies.

“Before I started in the Lambert lab, former lab members had discovered that not only is estrogen important in HPV-associated cervical cancers in mice, it is estrogen signaling through the non-cancerous stromal cells, also called the microenvironment, that is important,” said lead author Dr. Megan Spurgeon, an assistant scientist in Dr. Paul Lambert’s lab. “At the same time, Dr. Paul Ahlquist’s lab was looking at human cervical cancer samples and found a role for estrogen signaling through the stroma.

Spurgeon and her research colleagues wanted to know if HPV infection caused the epithelial cells to send a signal that altered the microenvironment, and if the stromal cells in turn sent a signal to the HPV-infected cells that promoted their cancerous growth. So they took a more detailed look at the Lambert lab’s mouse model of cervical cancer. In these mice, high-risk HPV genes are expressed only in cervical epithelial cells; the mice only develop cervical cancer if they are given extra estrogen.

“This model allows us to determine the contribution of HPV alone, estrogen alone, or both together,” Spurgeon said. “And then we used a really precise laser-based dissection tool that allowed us to exactly capture epithelial tissue or stromal tissue and to ask how they each respond to the different factors.”

With the epithelial and stromal tissue precisely separated, the researchers measured changes in total gene expression of the different tissue compartments in response to HPV or estrogen. They compared HPV mice to non-HPV mice, and found hundreds of gene expression differences in the stromal cells.

“The high-risk HPV genes alone were able to reprogram or change gene expression in the nearby stroma, even though HPV genes are not present in the stroma,” Spurgeon said.

Next, they asked how estrogen affected stromal gene expression with or without HPV in the epithelium. They found that estrogen alone causes some changes, as expected. But in the HPV mice treated with estrogen, they found a different set of genes expressed in the stroma than with either factor alone. It was this subset of genes that helped them identify the potential factors involved in crosstalk between the HPV-infected epithelial cells and the estrogen-receptive microenvironment.

“The hypothesis now is that those inflammatory chemokines are secreted by the stroma and are feeding back on the epithelial cells or some other cells in the microenvironment to drive cancer development,” Spurgeon said. “The next step is to use our mouse model and genetically engineer it to knock down the chemokine receptors on different cell types or inhibit the chemokine signaling with drugs to see if they are directly contributing to cancer.”

While estrogens are not linked to other HPV-associated cancers, this study highlights how HPV influences the microenvironment to contribute to other cancers.

“The fact that HPV alone was able to reprogram the nearby stroma is an important finding, and suggests that HPV could be conditioning the microenvironment to respond to other factors in other HPV-associated cancers,” Spurgeon said.

The study was published online October 9 in the journal Proceedings of the National Academy of Sciences. It was funded in part by NIH grants CA022443 and P30 CA014520.

Spurgeon is supported by an NIH R50 Research Specialist award (CA211246), a category of new support grants for exceptional scientists who are pursuing research in an existing research program but are not faculty leads themselves. She is the first recipient of such an award at UW; read more about Spurgeon and her R50 award here. Study co-authors include UW Carbone Cancer Center members Lambert, director of the McArdle Laboratory for Cancer Research; Ahlquist, investigator at the Howard Hughes Medical Institute, the Morgridge Institute for Research and McArdle; Dr. David Beebe, director of the UW Microtechnology, Medicine and Biology Lab; and Dr. Avtar Roopra, associate professor of neuroscience.

This article was originally published at https://www.med.wisc.edu/news-events/study-shows-hpv-works-across-cellular-borders-to-drive-cervical-cancer/51428