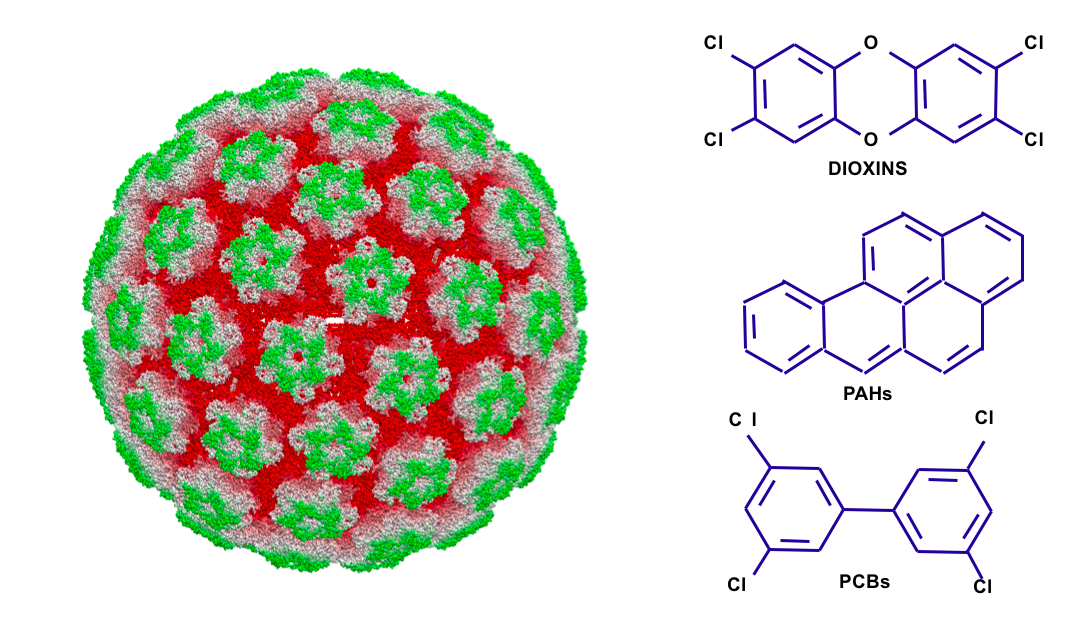 Left: a papillomavirus. Right: dioxins, polycyclic aromatic hydrocarbons (AHRs), and polychlorinated biphenyls (PCBs). PAS proteins regulate a variety of downstream responses to these three molecules, some of which are toxic effects.

McArdle is pleased to announce that Paul Lambert and Chris Bradfield recently received Outstanding Investigator (R35) Awards from the National Institutes of Health. The R35 award is designed to support proven research investigators, allowing them the flexibility to pursue projects with more ambitious scopes and potential for innovation. Lambert and Bradfield’s recent grants were awarded by the National Cancer Institute (NCI) and the National Institute of Environmental Health Sciences (NIEHS), respectively.

Dr. Lambert is the director of the McArdle Laboratory, as well as the Howard M. Temin Professor and Chair of Oncology and the UW Carbone Cancer Center‘s Virology Program Leader. His grant was awarded in 2017 and provides 7 years of >$900,000 annual funding.

Dr. Bradfield is Professor of Oncology, director of the Molecular and Environmental ToxicologyGraduate Program, a member of the UW Carbone Cancer Center‘s Genetics Program, and served as interim director of the Wisconsin Institute for Discovery (WID) from 2015 to 2017. His grant, also awarded in 2017, provides 8 years of funding of >$800,000 annually.

Bradfield’s R35 will allow him to undertake a collaborative and transdisciplinary approach to investigating the role of the PAS family of sensor proteins and how they interact with environmental factors to cause disease. PAS proteins are involved in sensing a variety of key physiological conditions, including oxygen status, microbiome changes, and circadian time. By investigating the pathways by which key PAS proteins act, the Bradfield group hopes to generate better prevention and treatment solutions for a wide variety of environmentally influenced conditions including epithelial hyperplasia, immunosuppression, teratogenesis, and tumor promotion.

We are also pleased to announce that additional R35 grants were recently awarded to several McArdle alumni including John Coffin, an American Cancer Society Professor of Molecular Biology at Tufts University; Elsa Flores, a Senior Member of the Moffitt Cancer Center; Thomas Kensler, Professor of Pharmacology and Chemical Biology at the University of Pittsburgh; and Gary Perdew, the John T. and Paige S. Smith Professor in Agricultural Sciences at Pennsylvania State University.

Congratulations to all McArdle R35 recipients, past and present!

Note: The original version of this article failed to include Gary Perdew as a McArdle alumni recipient of an R35 award. We apologize for the mistake.