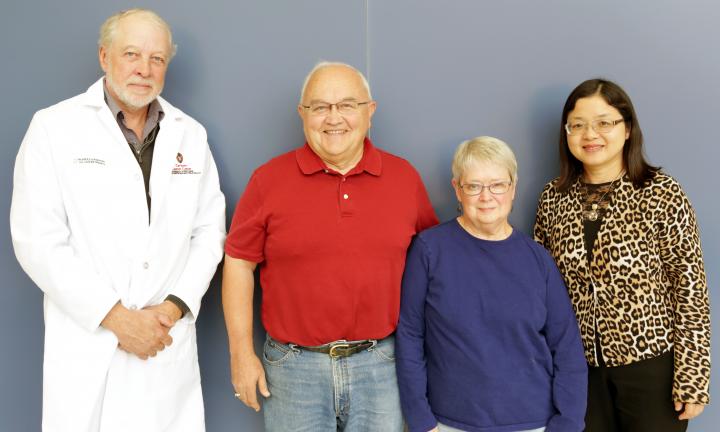 Wei Xu, right, with McArdle Director Paul Lambert and Ron and Ruth Niendorf. Mr. and Mrs. Niendorf were friends and neighbors of Marian Burgenske, and helped her establish the endowment for Dr. Xu’s professorship.

McArdle is excited to announce that Wei Xu has been named the new Marian A. Messerschmidt Professor in Cancer Research. Dr. Xu, who has been a faculty member with McArdle since 2005, is also a member of the Carbone Cancer Center Genetics Program and the National Institutes of Health Cancer Biomarkers Study Section. The Messerschmidt endowed professorship was originally held by former McArdle director and Department of Oncology chair Norman Drinkwater, now the Associate Vice Chancellor for Research in the Biological Sciences.

Dr. Xu’s research focuses primarily on studying the transcriptional regulation of estrogen receptor signaling in breast cancer, as well as the epigenetic modifications associated with carcinogenesis. Recently, groundbreaking work from her lab studying how the CARM1 methyltransferase protein regulates cancer progression has been published in premier journals including Nature Cell Biology, Nature Communications, and Cancer Cell.

“Curing breast cancer is our mission,” said Dr. Xu of her lab’s work. “However, there are many different subtypes, so we need to know more about the molecular mechanisms for the initiation, metabolism, and metastasis of breast cancer so we can design more personalized treatments.”

The named professorship recognizes Dr. Xu’s dedication to cancer research and her past accomplishments, and provides her financial support to continue her investigation into breast cancer going forward. Proceeds from the endowment will be used both to support Dr. Xu’s salary and provide her lab with additional funding.

The donor of the endowment for Dr. Xu’s professorship, Marian Burgenske, was a lifelong resident of the Madison area. Born in 1906, she graduated from Wisconsin High School and attended the now-defunct Madison Business College. Shortly after graduating, Marian began working at the registrar’s office of Madison Area Technical College, a job she served in for over 45 years.

As she began working, Marian’s father gave her an ultimatum: she could continue living at home, but only if she was responsible with her money. For Marian, it was an easy choice. She decided to continue living with her parents, even after marrying her husband Rodney in 1930. This financial freedom allowed Marian to begin investing her income in stocks and bonds from a young age. She was an extremely organized and shrewd investor, never using a bookkeeper but rather meticulously tracking and recording all of her own investments.

Marian’s own experiences with cancer inspired her to donate the fruits of her hard work, thrift, and prudent investing to supporting cancer research.  During her early life, she battled ovarian cancer, and several decades later was diagnosed with breast cancer. Her neighbor and close friend Ron Niendorf suggested that Marian fund an endowment, allowing the impact her donation to continue in perpetuity. She agreed, and the Marian A. Messerschmidt endowment was established in her maiden name, as per her wishes. The Marian A. and Rodney P. Burgenske Chair in Diabetes Research at UW-Madison, currently held by Dr. Vincent Cryns, as well as the Marian Messerschmidt Scholarship for judicial reporting at MATC were also established from her estate.