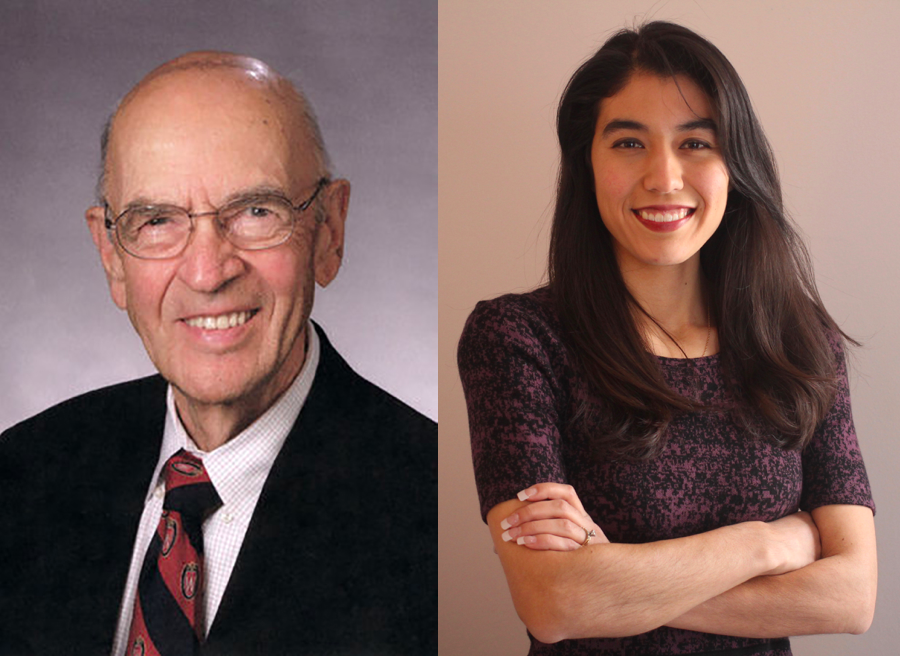 On June 6, 2014, Dr. Roswell “Roz” Boutwell gave a talk on McArdle’s early history. Dr. Boutwell had joined McArdle in 1945, and was one of the core faculty members who helped transform McArdle into a leading cancer research institute. His talk highlighted his role along with the role of many of his colleagues during the early years of McArdle, and delved into some of the key discoveries which propelled McArdle’s research.

Dr. Boutwell passed away on August 25, 2017, at the age of 99. He was the last surviving member of McArdle’s early faculty core. Though the original women and men whose work spearheaded McArdle’s growth and development are no longer with us, their legacy persists thanks to their indelible contributions to the University of Wisconsin and basic cancer research.

Below is a reflection by McArdle graduate student Alexandra Law on Dr. Boutwell’s talk, originally published in July of 2014. A memorial to Dr. Boutwell can be read here.

Upon leaving a pleasant community talk by Dr. Roz Boutwell, a longtime Professor Emeritus of Oncology at the McArdle Laboratory for Cancer Research, I couldn’t help but think of a quote made popular by Sir Isaac Newton: “If I have seen further it is by standing on the shoulders of giants.”  For Dr. Boutwell had just finished speaking of the early days of McArdle Laboratory and of the “Core” group of individuals involved who played key roles in establishing the first cancer research program at the University of Wisconsin; a program which had its humble beginnings 75 years ago in the year of 1939, and would grow to be recognized around the world as a leading center for basic cancer research.

What was particularly remarkable about this talk was 97-year-old Dr. Boutwell himself. Not only was he still quite energetic and incredibly sharp-minded but, as his age suggests, he was a part of this “Core” group of academics who had such high hopes and ambitions for basic cancer research at the University of Wisconsin. These scientists were staunchly dedicated to initiating and developing a strong cancer research program at a time when there was very little support and funding for it. Dr. Boutwell spent the majority of his talk focusing on this “Core” group of people with their remarkable achievements and contributions to cancer research.

Dr. Boutwell identified the years of 1939-1948, the first years of McArdle Laboratory, as key for the program. He stressed that the work of this “Core” group during this time was instrumental to McArdle’s success many years later. Dr. Boutwell stated that to him, the word “Core” meant “heart.”  He was undoubtedly referring to the incredible persistence and determination that this “Core” group of academics had in building a strong cancer research program in Wisconsin and in the US.

Introducing the people that made up the “Core”, Dr. Boutwell started with Dr. Harold P. Rusch. Dr. Rusch, who obtained his college and medical degree from the University of Wisconsin (UW), is easily considered the most influential member of the “Core” because he was the first Director of the McArdle Laboratory and the first key motivator in establishing a cancer research program in Wisconsin. With the help of funds bequeathed by Michael W. McArdle, an attorney and entrepreneur from Door County, Wisconsin, who before his passing from cancer in 1935, requested that his funds be directed towards cancer research in Wisconsin, Dr. Rusch spearheaded the building of a facility on the UW campus to house laboratories solely devoted to cancer research. Dr. Boutwell describes Dr. Rusch as being very optimistic, energetic, easily approachable, and willing to talk to anybody. Dr. Rusch was a leader and having received training in Physiology, became very interested in cancer and implementing the first cancer research on campus. He believed that the field of Biochemistry could reveal many of the unknowns of cancer and hoped to look inside a cell to visualize the mechanisms involved. Dr. Rusch, being the first Director of McArdle, was responsible for successfully recruiting many strong scholars to serve as faculty in the program. These early faculty members proved to be outstanding scholars in their own right and thus comprised the rest of the “Core” group that would propel McArdle forward in cancer research.

Dr. Rusch’s first faculty recruit was Dr. Van R. Potter. Dr. Potter received his undergraduate degree from South Dakota State College and received his Ph.D. at UW. In his book “Something Attempted, Something Done,” Dr. Rusch describes Dr. Potter’s early interest in Enzymology; specifically, comparing enzyme activities in normal and cancerous tissues. Dr. Boutwell emphasized that it was Drs. Rusch and Potter that made up the “heart” of the “Core”. Though they were both studying separate problems, they communicated often and filled the other in on what was and was not working in the lab. They quickly understood that, although they were the first and, for a short time, the only project leaders present in the new program, that by working together they could establish a foundation for cancer research appealing to new faculty recruits who shared their goals.

The next two recruits of the fledgling program were James and Elizabeth Miller who arrived in the program in 1943 and 1945 respectively after completing their graduate training at UW. James, or “Jim” as he was known by his colleagues, was brought in for his expertise in chemical carcinogenesis and Elizabeth, or “Bette” as she was more affectionately known in the department, was sought after for her training in nutritional carcinogenesis. While at McArdle, both published seminal work that Dr. Rusch describes as “classic in its field”. Dr. Rusch states that “[James and Elizabeth] have added more to our basic understanding about how chemical carcinogens induce cancer than anyone else in the world.”  Among their many contributions, one of their greatest was recognizing that most chemical carcinogens require metabolic activation to become electrophilic reactants. It is these chemically active compounds that can induce mutations and thereby be carcinogenic. Dr. Boutwell emphasized that though each was a highly proficient scientist in his and her own right, and that while in the department they each had their own studies and lab personnel, the Millers operated often as a team. He stressed that they complemented each other, they were each in tune to the other’s work, and they often relied on the other’s professional expertise. Dr. Boutwell spoke highly of them and considered them to be close colleagues and friends. It was with sorrow that he spoke of their passing from cancer.

Lastly, Dr. Boutwell spoke of himself and his arrival at McArdle in 1945. He received his graduate training in the Biochemistry Department at UW. At that time, Dr. Rusch had been seeking someone with knowledge in nutrition to provide expertise on the effects of diet on cancer formation. Since Dr. Boutwell had developed a strong background in nutrition as a graduate student, Dr. Rusch considered him to be a suitable candidate to provide this expertise. In addition to his work on nutrition and carcinogenesis, Dr. Boutwell made great advances in the field of tumor promotion. He found that some compounds that initiate cancers may not be sufficient to promote tumors, but that these compounds in combination with a tumor promoter can cause cancers. Dr. Boutwell mentioned that it was in these early days that they began to appreciate the power of hormones in carcinogenesis and early questions of the role of hormones in prostate cancer were formed at this time.

In addition to speaking of his previous research, Dr. Boutwell went into detail about the strong relationships he had developed with other faculty members of the program. He told several entertaining stories of those early days, one of which involved him participating in a weekly poker club that these colleagues used to be a part of. While telling these stories, Dr. Boutwell briefly spoke of his personal relationship with his wife, Louise, or “Lou”. In hearing Dr. Boutwell’s stories, it was clear that he treasured the personal and professional relationships he had developed with his family and his colleagues. Accordingly, members of the department have considered Dr. Boutwell to be a particularly special colleague in that whenever a fellow colleague was in need of assistance, he was consistently available to help. His trustworthiness, reliability, and dependence were important contributions that Dr. Boutwell made to the program. Hearing of how Dr. Boutwell is remembered by his colleagues helped me realize that McArdle was built not only by its research but also by its individuals such as Dr. Boutwell who made significant contributions, many of which cannot only be measured by publication success, to the program.

Dr. Boutwell concluded his talk recognizing that an hour was simply not enough to recognize every person involved in the early days who contributed to the success of McArdle and that there were many names that he did not have a chance to introduce. Yet he emphasized that the roles of Drs. Rusch, Potter, James Miller, Elizabeth Miller, and himself were crucial to establishing the program that remains in existence today, 75 years later. Sadly, the sorrow that Dr. Boutwell felt about the Millers also punctuated his talk since of the “Core” members described, he alone survives. Yet he emphasized how grateful he was to have been able to spend much of his career with such remarkable colleagues and was pleased and excited to be able to speak to us at length about them and their contributions to the cancer research program at UW and to the cancer research field. It was upon hearing him that I was reminded of the quote about “… standing on the shoulders of giants.”  It was quite a pleasure to be a member of this audience and hear of the magnanimous efforts made by historically important members of McArdle Laboratory to create a strong research program that would provide the highest training for graduate students such as myself. Experiences such as this one help me and other students appreciate being given the opportunity to be a part of this excellent program.