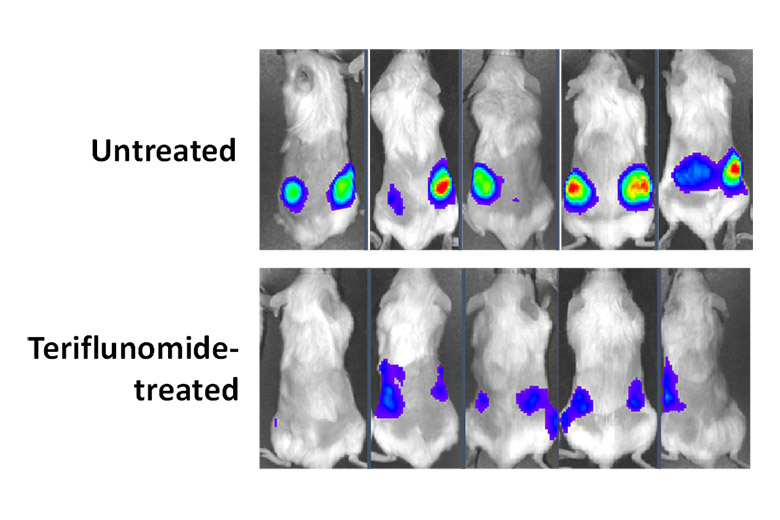 Teriflunomide inhibits the growth of EBV-transformed cells in a mouse model. Immune-deficient mice were injected under the skin on their flanks with cells carrying luminescent EBV.  Once a small tumor had grown, mice were treated with teriflunomide three times per week.  This image shows the amount of luminescence 13 days after treatment was started.  Purple = least luminescence; Red = highest luminescence. From Bilger et al., Oncotarget 2017 Jul 4; 8(27): 44266–44280.

Epstein-Barr virus (EBV) can cause the development of fatal lymphomas in transplant patients.  EBV can infect human cells in two different forms: latent infection, in which the virus does not kill the infected cell, but expresses cancer-causing viral proteins; and lytic infection, in which viral proteins are expressed that kill the infected cell.  Both the latent and lytic types of infection contribute to the proliferation of infected cells in immunosuppressed patients.

We show that an FDA-approved drug currently used to treat multiple sclerosis, teriflunomide, not only inhibits the growth of latently EBV-infected cells, but also prevents the lytic form of EBV replication.  Furthermore, we find that a clinically relevant dose of teriflunomide inhibits the development and growth of EBV-induced lymphomas in two mouse models.  Our investigations suggest that teriflunomide (and its prodrug, leflunomide) may be useful for preventing and/or treating both latent and lytic EBV infection in patients who require immunosuppression (such as transplant recipients) and are at high risk for developing EBV-induced lymphomas.

Link to paper in Oncotarget: http://www.impactjournals.com/oncotarget/index.php?journal=oncotarget&page=article&op=view&path[]=17863&pubmed-linkout=1