Paul F. Lambert, Professor of Oncology and Director of the McArdle Laboratory for Cancer 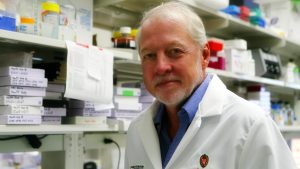 Research, has been selected as a recipient of the prestigious WARF Professorship by the University of Wisconsin-Madison.  These Professorships “are intended to honor those faculty who have made major contributions to the advancement of knowledge, primarily though research endeavors, but also as a result of their teaching and service activities.”

Dr. Lambert is being recognized for his research on the pathogenesis of human papillomaviruses (HPV), which are associated with about 5% of human cancer.  More specifically, Lambert and his laboratory have defined the roles of viral and host factors in these cancers, identified new therapeutic targets, and defined the mechanism by which these human tumor viruses evade the host immune system.  They have also defined the roles of multiple viral genes in the viral life cycle.

Dr. Lambert received his PhD at the University of Wisconsin-Madison and carried out postdoctoral research at the Laboratory of Tumor Virus Biology at the National Cancer Institute (NCI).  He returned to Wisconsin as an Assistant Professor in 1990 and became Chair of the Department of Oncology and Director of the McArdle Laboratory in 2014.  An expert on the role of HPV oncogenes in cancer, Lambert has published over 150 scientific papers and holds an NCI Outstanding Investigator Award.  In addition, Dr. Lambert is a sought-after mentor and lecturer, editor, and participant on many study sections and advisory panels.

“I am honored by this recognition and its acknowledgement of the contributions of my current and former students, postdoctoral trainees, and other laboratory members,” said Lambert.  “Each discovery builds on earlier work, all with the common goal of better understanding the cancer problem.” 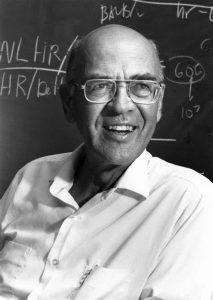 Dr. Lambert has elected to name his Professorship the “Roswell K. Boutwell Professor of Oncology” in honor of his long-time colleague at the McArdle Laboratory.

“Roz Boutwell exemplified the collegial spirit of the McArdle Laboratory.  He was a collaborative scientist and mentor and played prominent leadership roles in several national organizations”, said Lambert.

Roswell K. Boutwell (1917-2017) was a founding member of the McArdle Laboratory, joining the faculty as an Assistant Professor in 1949 and becoming Professor Emeritus in 1988.  From 1984 to 1986 Dr. Boutwell went to Hiroshima, Japan to serve as the Chief of Research at the Radiation Effects Research Foundation.  Boutwell received numerous honors throughout his career including the G.H.A. Clowes Award from the American Association for Cancer Research, the Founder’s Award from the Chemical Industry Institute for Toxicology, and the Medal of Honor from the American Cancer Society. 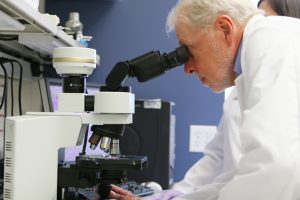 carcinogenesis in the skin laid the groundwork for many of his studies.  “Roz’s fundamental contributions to the biology of skin carcinogenesis have provided the paradigm that drives much of modern cancer research in this area,” said Lambert.