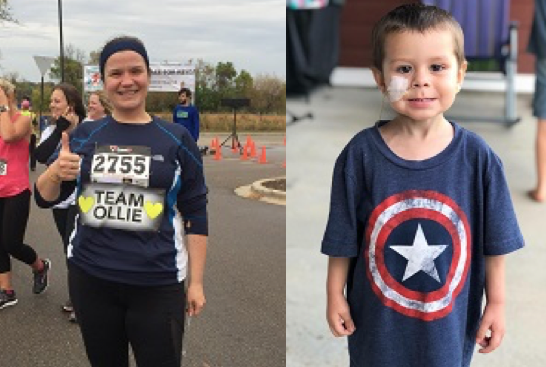 Dr. Spurgeon at the 2017 Race for Research, and her cousin Ollie

Megan Spurgeon, PhD, is a scientist with the McArdle Laboratory for Cancer Research at the University of Wisconsin, studying how the viruses HPV and Merkel Cell polyomavirus are linked to human cancers. Having a career in cancer research, Spurgeon has participated in the UW Carbone Cancer Center ’s signature fundraising event, Race for Research, a few times before, raising “a little bit of money,” she says. When she signed up last year, she did not expect to become the event’s top fundraiser.

“We found out about Ollie in June of 2017,” Spurgeon says of her cousin’s son, Oliver. “He was diagnosed with stage four neuroblastoma, and it had already metastasized to other sites. All of a sudden I had this personal connection to raising money.”

With her cousin’s blessing, Spurgeon shared Ollie’s story and began fundraising, mainly through social media, for neuroblastoma research at UW Carbone. Meanwhile, Ollie began treatments near his home in Missouri, and later in Texas.

“The treatments are so gruesome, they’re almost archaic,” Spurgeon says. “They’re not really made for children.”

All of the nearly $8,000 raised through Spurgeon’s Race for Research personal fundraising campaign last year went to a neuroblastoma research account at UW Carbone, where neuroblastoma researchers can apply for funds to study the cancer. In addition to improving survival outcomes – currently, stage four patients have only around a 50 percent chance of beating the disease – these researchers strive to develop treatments that are less toxic.

“With chemotherapy, we all know the side effects: it doesn’t attack the tumors specifically, it hurts any cell that’s rapidly dividing, so there’s a lot of toxicity,” says Christian Capitini, MD, a pediatric oncologist who treats neuroblastoma patients and researches it in his lab. “Immunotherapy has become one of the most promising areas for that disease. With immunotherapy, it’s targeted to something that’s on the tumor, so the toxicity we see is much more limited.”

Capitini’s lab studies ways to improve upon the current FDA-approved immunotherapy, itself developed by UW Carbone pediatric oncologist Paul Sondel, MD, PhD. With his research group, Capitini has shown in a mouse model that if they isolate a type of immune cell known as a natural killer cell, and activate those cells with a combination tumor-targeting/immune stimulating drug, then they can reduce the tumor burden in mice and increase overall survival.

“That work has led to a clinical trial here, supported in part by Race for Research funds, that’s testing these activated natural killer cells in neuroblastoma patients,” Capitini says.

And, because he was able to begin this promising research with philanthropy funds, Capitini was recently awarded a $1.75M grant from the National Institutes of Health to continue his neuroblastoma research.

“Philanthropy, such as through Race for Research, helps build the infrastructure to get these clinical trials off the ground, and to earn these federal grants,” Capitini says.

For her part, Spurgeon is again running and fundraising this year in honor of Ollie, who sadly passed away this past July. She is also hoping to raise awareness for childhood cancers.

“I had never really heard about neuroblastoma before Ollie was diagnosed, so raising awareness for this type of cancer is important to me,” Spurgeon says. “I don’t think anyone thinks, ‘Oh, I need to raise money for pediatric cancer,’ until it affects you personally. But research is the only thing that’s going to help us prevent there being another Ollie.”

In 2017, over 1400 Race for Research participants raised over $146,000 for cancer research at the UW Carbone Cancer Center. Run or walk in the 2018 race and help make a difference. For more details and to sign up, please visit carbonesrace.org.

To read more about Ollie and Spurgeon’s team, please visit her Race for Research team page.

This article was originally posted at https://www.uwhealth.org/news/racing-to-improve-cancer-patient-outcomes-through-awareness-and-research/52231