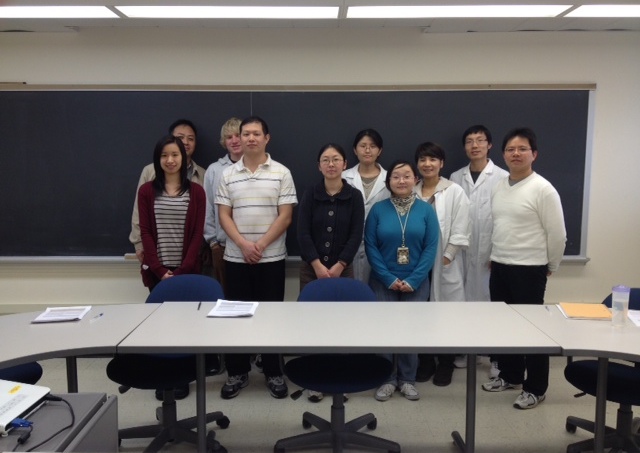 Dr. Zhang (fifth from the left) with members of her research group

The McArdle Laboratory is excited to announce that Professor Jing Zhang has been named the new Centennial Professor of Oncology. This professorship, which is endowed through the UW School of Medicine and Public Health, recognizes Dr. Zhang’s outstanding research contributions and provides support for her ongoing research efforts.

Dr. Zhang completed her undergraduate studies at Beijing University, and received her Ph.D. in pharmacology from the Perelman School of Medicine at the University of Pennsylvania in 2001. After completing her postdoctoral research at the Whitehead Institute for Biomedical Research in Cambridge, MA, she joined the McArdle faculty in 2007.

A major focus of Dr. Zhang’s research centers on the Ras protein family and the roles of these proteins in blood cancers. Ras proteins are signaling GTPases that play key roles in regulating cell growth and differentiation. Mutated forms of the Ras proteins are heavily implicated in driving the genesis and progression of cancers.

Though the significance of Ras proteins in solid tumor cancers is well established, their role in blood cancers has been more elusive. Recently, researchers including Dr. Zhang have begun to realize that Ras mutations contribute to a wider range of blood cancers than initially thought, including forms of childhood leukemia. Many patients acquire Ras mutations post-chemotherapy, making further treatment of these patients a significant challenge.

“My research group started by focusing on a pair of pediatric and adult rare leukemias, and as our knowledge has expanded we are beginning to study other forms of leukemia as well,” says Dr. Zhang. “The problem of how to treat cancers with Ras mutations is becoming more urgent and widespread than we could have anticipated.”

One area of particular interest to Dr. Zhang and her research group is hematopoietic stem cells (HSCs), stem cells in the bone marrow that give rise to many different lines of blood cells. Mutations acquired by HSCs are passed on as the cells renew and differentiate into specific cell lines, leading to what researchers call “clonal expansion”. Via this mechanism, an initial mutation of Ras, or “first hit”, creates a large colony of mutated cells that are highly susceptible to becoming cancerous.

In addition to her research pursuits, Dr. Zhang is also a Co-Leader of the UW Carbone Cancer Center’s Developmental Therapeutics Program, which works to develop new therapies and treatments for patients with cancer. In her leadership role, Dr. Zhang helps to encourage and facilitate collaborations amongst basic research scientists working to discover targets for novel therapies. Additionally, she works to integrate the basic research side of the program with the drug discovery and clinical trial areas to maximize the yield of research conducted within the program.

“The biggest challenge, but also the biggest potential reward of my research is discovering a way to effectively target the oncogenic Ras pathway,” says Dr. Zhang. “We have a lot of opportunities to collaborate in areas that are both new and exciting.”