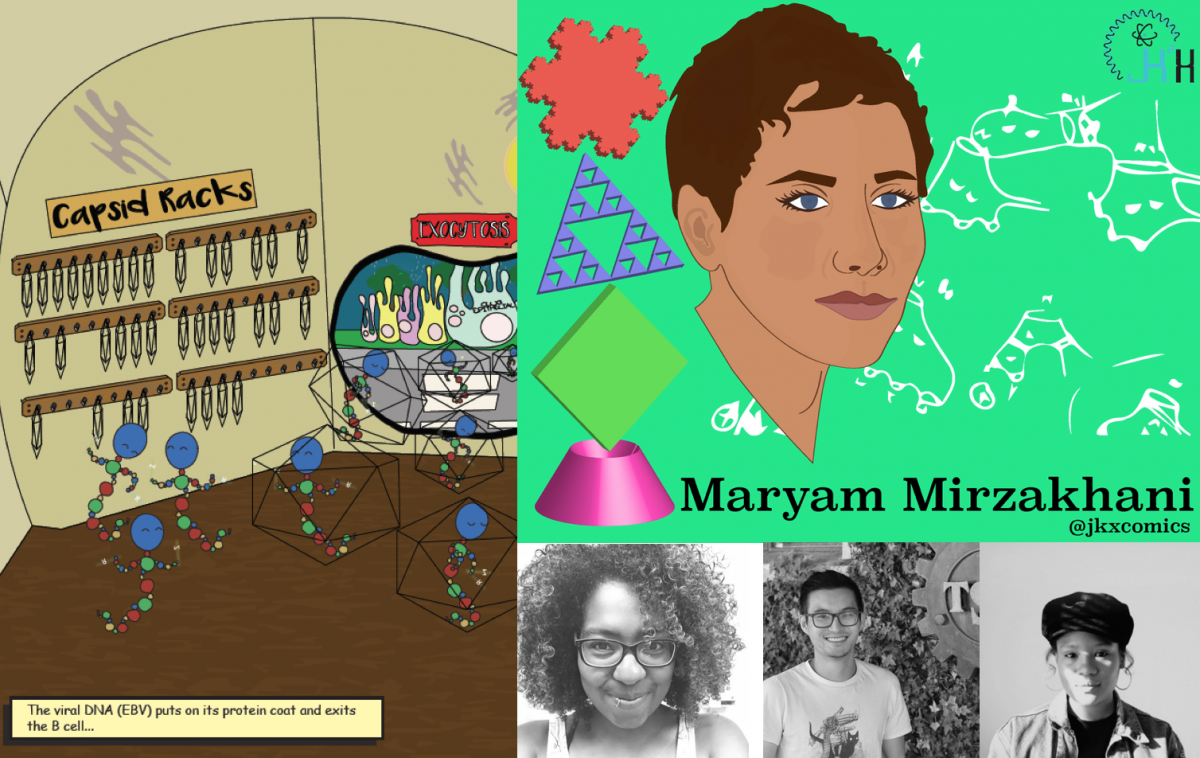 Above: a panel from the JKX comic strip “EBV and the Replication Dance” (left), an image of Stanford mathematics professor Maryam Mirzakhani from the JKX Women’s History Month feature “Women in STEM” (top right), and the JKX founders Jaye Gardiner, Ph.D., Khoa Tran, Ph.D., and Kelly Montgomery (bottom right, from left to right). Featured image on home page: a clip from the JKX comic strip “Did You Know: About HIV and Cancer?”. All images used with permission courtesy of JKX Comics.

“A picture is worth a thousand words.”

The scientists behind JKX Comics have taken that mantra to heart in their endeavor to help engage and educate young people about science.

JKX Comics was founded in 2015 by Jaye Gardiner, Kelly Montgomery, and Khoa Tran, three then-graduate students at the University of Wisconsin-Madison. Inspired by the wide array of cutting-edge research and the diversity of exciting scientific topics they encountered, they saw the potential to present STEM education in a more captivating way to young students.

“We felt that the way science is presented can be unengaging sometimes, so we wanted to use stories and humor to make science more exciting for kids in schools, and comic books seemed like a great way to do that,” said Jaye Gardiner, who completed her Ph.D. research in Dr. Nate Sherer’s lab as part of the Cancer Biology Graduate Training Program and is now a first-year postdoctoral researcher at Fox Chase Cancer Center studying pancreatic cancer. “No one from JKX had any formal training in visual arts or media. We mostly just figured it out as we went along.”

JKX highly values the accessibility of their content, choosing to make all of their individual comics available online for free at www.jkxcomics.com. The organization is almost entirely self-funded, and most of their promotion is done via social media. Collaborative by nature, JKX is always open to new members looking to make an impact in science communications. One new collaborator, Bayleigh Benner, is a third-year microbiology graduate student affiliated with the McArdle Laboratory, also training in the Sherer lab.

Some of the scientific topics JKX have helped illuminate for young people so far include the relationship between HIV and cancer, the role of gut bacteria in fighting infection, and the life cycle of Epstein-Barr virus. One of their next projects will be a CSI-style comic series, going through the different organs of the body and inviting readers to piece together the clues to diagnose what is wrong. JKX has also featured comics for Black History Month and Women’s History Month, spotlighting some of the overlooked people behind amazing scientific advancements.

“One of the things we try to focus on is representation,” said Gardiner. “A lot of young black girls who I’ve met through the Trip Initiative high school research program I am a part of have really gravitated towards me, and it blew my mind how excited they are just because I exist as a black female scientist. It’s so important for all young people to realize that science can be for everyone.”

Looking forward, JKX Comics is also seeking to expand public engagement with science via outreach events. JKX and collaborators were recently awarded a first-place prize of $2000 at the UW-Madison Arts Business Competition, with a project aimed at helping to teach scientists how to create stories to communicate their research to the public via comic strips and other visual media.

“Most people don’t know very many scientists or their work. In fact, a recent study showed that only 19% of Americans could name a single living scientist,” Gardiner said. “By facilitating outreach for the general public, we can help change that by connecting people to the scientists at the University of Wisconsin making amazing discoveries.”

“Our students face constantly changing career paths, and I’ve been incredibly impressed with how quickly Jaye, Bayleigh, and the JKX team made this project a huge success both in terms of their outreach mission and also in terms of their professionalism, dedication, and the high quality of the product,” says Associate Professor Nathan Sherer. “We’ve already used some their comics for outreach events including Grandparents University, and plan to ramp up distributing them to visiting groups, prospective students, and undergraduate scholars doing research in McArdle or taking our cancer virology and cancer biology coursework. JKX Comics is truly a spectacular idea and emphasizes the breadth and innovative contributions of our remarkable trainees.”

JKX comics is currently looking for collaborators as part of their “Gaining Steam!” project. Apply to join their team at https://www.jkxcomics.com/gainingsteamapplication.