March is Women’s History Month.  It is a time to reflect on the accomplishments of women of previous generations and to celebrate the impact they have had on our lives.

There were three women who joined the McArdle Laboratory in its very early years and who spent their entire careers here.  With over 125 years of experience at McArdle between them, they were instrumental in developing the organization and its culture and in fostering the collaborative spirit for which it is known.

Elizabeth Cavert came to the University of Wisconsin-Madison to attend Graduate School in Biochemistry, receiving a WARF Fellowship of $700 per year.  At the time, those in Biochemistry 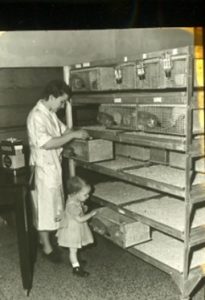 insisted that she pursue a joint program in home economics and biochemistry because they could find few jobs for women in biochemistry1.  Although she took courses in home economics, Betty (as she was known to her friends) focused on her interest in biochemistry and carried out research under the direction of Professor Carl Baumann.  Eventually she was allowed to drop home economics from her course of study.  After receiving her Ph.D. degree, Betty joined the McArdle Laboratory as a postdoctoral fellow/instructor in 1945.  By that time she had married James A. Miller, and soon they both held faculty positions and shared both their personal and professional lives.  As their colleague Van R. Potter once said, “Jim and Betty are to each other like the two strands of DNA, each one the complement of the other”2.  The Miller’s contributions to cancer research in the metabolic activation of chemical carcinogens and related areas are unrivaled.  In recognition of her scientific accomplishments, Betty was elected concurrently with her husband to the National Academy of Sciences in 1978 and her subsequent appointment to important responsibilities within the academy.  Their collaborative achievements were recognized by more than 25 joint awards, including the Bertner, Papanicolaou, Bristol-Myers, FASEB Life Sciences, the

General Motors Mott Award, and honorary membership in the Japanese Cancer Association.  Betty also received the Distinguished Alumna Award from the University of Minnesota, the Prix Griffuel from the Association pour le Developpement de la Recherche sur le Cancer, and an honorary Doctor of Science degree from the Medical College of Wisconsin.  Betty made important contributions to national science policy through her participation on numerous committees and boards.  She was twice elected to the Board of Directors of the American Association for Cancer Research, 1957-1960 and 1974-1977, and was elected President for the 1976-1977 year.  She served continuously on the Board of Directors of the American Cancer Society from 1980 on and was appointed to the President’s Cancer Panel in 1978.  She was a member of the Advisory Committee to the Director of the National Institutes of Health from 1984-1987.  Betty also worked tirelessly for the McArdle Laboratory, serving as the Associate Director from 1973 until her retirement3.  Dr. Henry C. Pitot, Director of the McArdle Laboratory during this time, said that Betty viewed her administrative responsibilities as service to her colleagues, “One makes few really outstanding decisions in one’s time on earth.  The decision to ask Betty Miller to assist me in the administrative duties of the McArdle Laboratory was one of the best decisions I have or ever will make”1.  Betty’s organization skills carried over at home, keeping track of homework and numerous activities for Jim and Betty’s two daughters. 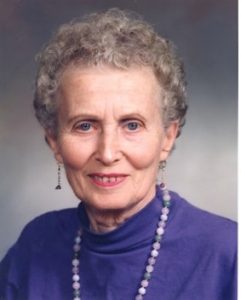 Ilse L. Riegel, Ph.D. (at McArdle from 1952 until her death in 2004)
First Graduate Program Coordinator at the McArdle Laboratory

Ilse joined the laboratory of Dr. Gerald C. Mueller as a postdoctoral fellow in 1952 where she carried out research on the role of estradiol in cancer.  Her expertise in writing and editing and her interest and commitment to the people around her soon led her in a new direction.  She became an assistant to Harold P. Rusch, McArdle’s first director, helping to prepare grant proposals, developing a departmental reading room (named after her in 1995), and serving as the managing editor of Cancer Research.  She taught courses on scientific writing and became the go-to person for questions on English grammar and style (remarkable given that her native language was German).  When McArdle’s graduate program was started, Ilse took on the role of coordinator, serving as a champion of students and postdocs. Her Thanksgiving table always included McArdle students who couldn’t get home.  As a former graduate student said at 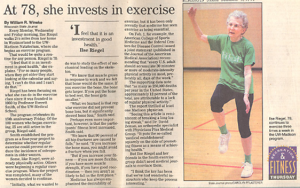 the time of Ilse’s death, “Ilse was a wonderful role model, particularly for women graduate students.  She taught me how to mentor students by her example.  She made everyone around her feel competent and made us exert ourselves to live up to her expectations.”  Ilse also was passionate about exercise.  In 1980 she joined a UW study on exercise and osteoporosis in women over age 40.  At the age of 87 Ilse still walked 3 miles to the Natatorium at 5:30 a.m. three times a week – year-round – to participate in the class, and then walked to work.  Ilse also was a devoted wife, mother, and grandmother. 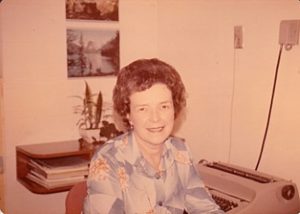 Helen Iverson joined the McArdle Laboratory in 1954 and became the administrative and business leader for the department.  Her organizational skills and commitment to excellence allowed the professors to focus on their research programs rather than having to worry about day-to-day 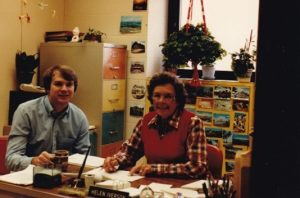 budgeting, personnel, and purchasing functions.  Helen had a strong loyalty to McArdle.  As Dr. Pitot said in his eulogy of Helen, “If the McArdle Laboratory were built with concrete and steel, it has been supported for many years by the administrative ability, the financial acuity, and the caring personality of Helen Iverson.  Whatever scientific accomplishments have been achieved by the men and women of this laboratory over the last three decades, Helen Iverson played a significant role in them all.”  Helen also was a champion bowler and a dedicated wife, mother, and grandmother.

1McKinnell, R.G.  The Understanding, Prevention and Control of Human Cancer.  The Historic Work and Lives of Elizabeth Cavert Miller and James A. Miller, 196 pp.  Brill, 2016.