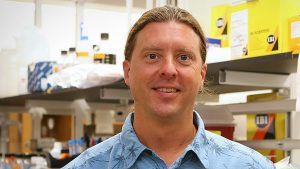 Our lab focuses on determining the mechanisms of human cytomegalovirus (HCMV) replication and pathogenesis, and also uses the virus as a tool to probe the pathways that lead to cell cycle progression and oncogenesis.  We are interested in HCMV because it is a ubiquitous and medically relevant virus that causes severe disease in immunocompromised patients, is the leading viral cause of birth defects, and impacts upon the etiology and/or progression of cardiovascular disease and cancer.  As an obligate intracellular parasite, HCMV relies upon its host cell for its replication.  Thus, to promote its own survival, HCMV has evolved ways to commandeer cellular pathways such as cell cycle progression, transcriptional silencing, and protein degradation.

pp71 induces protein degradation in an unusual, proteasome-dependent but ubiquitin independent manner.  We are actively exploring the mechanism through which it accomplishes this important task.  pp71 degrades the Rb tumor suppressor that controls progression through the G1 phase of the cell cycle.  By degrading Rb, pp71 stimulates cell cycle progression.  We are interested in further characterizing the interaction of pp71 with the Rb tumor suppressor and the role of this interaction during viral infection and cellular transformation.  pp71 also degrades Daxx, and thus neutralizes a cellular intrinsic antiviral defense mediated by this nuclearly localized protein, allowing for viral gene expression during lytic HCMV infections.  Interestingly, the virus prevents pp71-mediated degradation of Daxx during the establishment of latent infections by sequestering pp71 in the cytoplasm of infected cells.  Determining how pp71 is trapped in the cytoplasm is a major goal of the laboratory.

UL97 is a protein kinase, and we identified it as the first known viral protein that directly phosphorylates Rb.  Furthermore, we found that UL97 mimics the activities of the cellular cyclin-dependent kinases (Cdks) that drive cell cycle progression, thus identifying UL97 as the first viral Cdk (v-Cdk).  Our lab is continuing to study how UL97 phosphorylates Rb, stimulates cell cycle progression, and the role that these activities have during HCMV infection.  An interesting corollary to these studies is that the cellular cyclin-dependent kinases (Cdks) that normally phosphorylate Rb are activated during HCMV infection but fail to phosphorylate Rb.  We would like to determine how HCMV can prevent Cdk-mediated Rb phosphorylation, and then perhaps use that approach as a cancer chemotherapy.

Finally, we are beginning to explore mechanisms of HCMV pathogenesis.  In particular we are interested in potential roles for HCMV infection in cancers, most notably glioblastomas.  HCMV DNA genomes and protein antigens are found in the majority of glioblastomas.  Because HCMV encodes proteins that can induce inflammation, thwart the immune system, prevent apoptosis, promote angiogenesis, and stimulate cell cycle progression, we are initiating a translational research project investigating the oncomodulatory functions of HCMV.