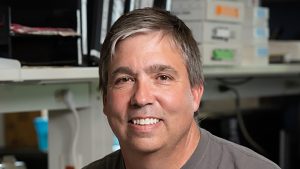 Colorectal cancer is the second leading cause of cancer death in the United States. These cancers, like most cancers, are often heterogeneous with abnormal cells within a single tumor varying in several distinguishable properties including differentiation state, proliferation rate, and metastatic potential. Dr. Halberg’s research focuses on identifying sources of intratumoral heterogeneity and determining how such heterogeneity impacts prevention and treatment in the clinic. Many investigators have postulated that solid tumors, including colon cancers, are monoclonal arising from a single progenitor, and heterogeneity emerges as mutations give subpopulations a growth advantage. In contrast, his laboratory has demonstrated that hereditary and carcinogen-induced intestinal tumors in the laboratory mouse can have a polyclonal origin [Proc. Nat. Acad. Sci., USA 102:6960-5 (2005); Cancer Prev. Res., 4:916-23 (2011)]. Others have demonstrated that hereditary and sporadic colorectal tumors in humans can also be derived from multiple progenitors [Science 272:1187-09 (1996); Gastroenterology 138:1441-54 (2010)]. Two distinct models can explain polyclonality. An initiated progenitor could recruit one or more neighbors; alternatively, two or more independently initiated progenitors might simply cooperate. These possibilities were distinguished by generating mosaic mice in which one cell lineage was much more susceptible to tumorigenesis than the other. The observed number of polyclonal tumors was compared to the number predicted either from the recruitment model or the cooperation model. More polyclonal tumors are expected if an initiated progenitor is able to transform one or more neighbors. In two distinct kinds of mosaic mice, a high percentage of polyclonal tumors was observed. These results indicate that polyclonality is a consequence of recruitment, possibly mediated by paracrine oncogenic signaling [Proc. Nat. Acad. Sci., USA 110:11523-8 (2013)]. Thus, contrary to a longstanding belief in the field of cancer biology, solid tumors can have a polyclonal origin and consequently be heterogeneous even as they just begin to form.